The Netent company was founded in 1996 in Sweden, and since then has never ceased to improve. For example, among the most important achievements of the manufacturer you can notice one of the largest poker networks and security advancements. Moreover, it is the Swedish company that was a pioneer of the demo mode for games and mobile applications which also completely switched to online versions of slots not entitled to be installed on the PC. And, of course, this provider’s players get attracted by a wide range of gambling entertainment available wherever Internet is present.

Note that the manufacturer actively cooperates not only with online casinos, but also with offline land-based institutions, providing for their work.

To date, the manufacturer offers more than 200 online machines for every taste. Today, we will present the top ten most popular slots for September 2017.

Join Finn, a joyous and merry leprechaun, for a game of swirly spin in one of NetEnt’s masterpieces. This medium variance slot features a spiral reel with a 5×5 layout and has an RTP of 96.62%.

The slot also comes with sticky wilds, free spins, and has an Avalanche feature that substitutes for every symbol that was part of the winning combination, allowing you to win multiple times in a row. In addition, it also has four random features you can trigger at any time during the main game.

Answer nature’s call and delve deep into the lush and dark jungle filled with dangerous animals and fierce predators. Make sure to keep your eyes peeled because your journey will be both rewarding and perilous, and every new corner of the uncharted jungle hides rewards.

NetEnt’s Jungle Spirit is played across a standard playing grid of five reels and three rows of symbols. This high variance slot features 243 paylines and an RTP of 96.47%, as well as a ton of bonus features, such as the Butterfly Boost, Symbol Expansion, and the Free Spins feature.

Mega Joker is one of the most engaging video slots on the market that has the potential to become one of the most rewarding slots too. However, bear in mind that it requires a bit of skill and tactical play.

The gameplay is split between two 3×3 playing grids, both of which have five paylines. Whenever you win on the first grid, you can transfer your winnings to the Supermeter where you can win much more lucrative rewards, including the elusive and highly rewarding progressive jackpot.

Based on the legendary fairytale, Jack and the Beanstalk is yet another exceptional video slot in NetEnt’s game library. The slot was released in 2013 and has been one of the most popular and best-performing slots ever since.

It is played across 20 fixed paylines on a playing grid comprised of five reels and three rows of symbols and it features an RTP of 96.28%. It is also equipped with the Free Spins feature, Walking Wild feature, as well as three additional features you can unlock during the Free Spins mode that will help you climb the beanstalk and steal the treasure from the giant who lives in the castle in the clouds.

Divine Fortune is an outstanding video slot that takes you to ancient Greece where myths become a reality. Avoid Medusa’s gaze and steer clear of Minotaur’s labyrinth as you try to claim the divine fortune.

The slot features an RTP of 96.59%, 20 paylines, and a standard playing grid of five reels and three rows of symbols. However, apart from the expanding wilds and free spins, what makes this highly volatile slot stand out from the crowd is the three progressive jackpots it comes with, all ripe for the taking.

NetEnt’s Blackjack is played with six decks and allows players to bet on three different hands simultaneously. The game is exceptionally easy to play and comes with a beautiful and easy-to-navigate user interface that can be customised to promote the client’s brand.

The game features standard blackjack rules and players can place double, split, and insurance bets. At the same time, the game includes Quality of Life features, allowing you to adjust the pace of the game and choose one of the few jazz soundtracks.

As is the case with virtually every NetEnt’s title, Blackjack is available cross-platform, so players can enjoy it on their laptop or desktop computers, as well as smartphones and tablets.

Saddle up and get your pistol ready because this NetEnt’s western-themed slot will take you on an unforgettable journey through the Wild West.

Dead or Alive 2 is a sequel to an already popular game. It is a high-variance slot played across a standard playing grid of five reels and three rows of symbols. It features nine paylines and an RTP of 96.82%, making it easy to see why it has found its place on our list of top slots by NetEnt.

To make everything even more exciting and rewarding, the game includes wild symbols and three different types of Free Spins features.

Roulette Advanced is NetEnt’s take on the classic game of European Roulette. The exceptional graphics NetEnt’s video slots are known for are also present in their table games. Apart from superb graphics, Roulette Advanced comes with an excellent layout, allowing players to keep track of everything going on at the table.

In addition to smooth jazzy background music, NetEnt’s Roulette Advanced offers numerous Quality of Life features, allowing you to easily place, double, or clear your bets, as well as re-bet and spin the wheel 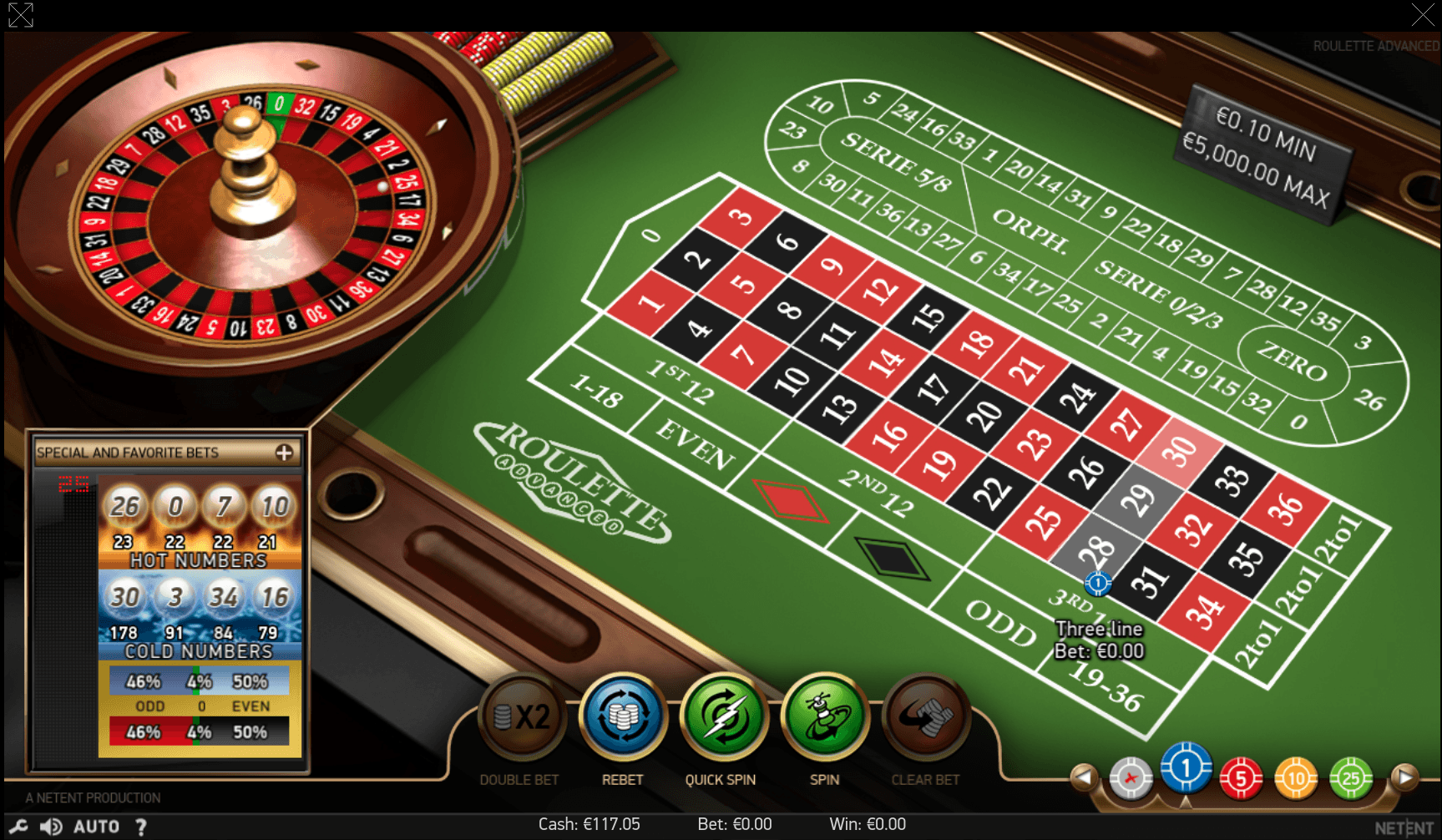 Ever since its release in 2013, Gonzo’s Quest has been regarded as one of the best slots of all time. Also, it was the first video slot that introduced NetEnt’s innovative Avalanche feature. This extremely popular slot earned its place on our list by offering a fantastic combination of stunning visuals and highly rewarding features.

It is played across 20 paylines on a standard 5×3 reel and includes an RTP of 95.97%. In addition, this remarkable video slot includes a Free Fall feature and an Avalanche feature that will reward you with a higher multiplier after each consecutive avalanche win.

For years, Starburst has been the most popular slot in the world, so it shouldn’t come as a surprise that it is also at the top of our list as one of the best slots ever made. A timeless classic, this slot is often found in numerous online casinos and used as part of welcome bonus and free spins promotions.

Starburst has an RTP of 96.09%, ten paylines, and is played on a standard 5×3 playing grid. One would think that Starburst is packed with insane features left, right, and centre, but, in reality, it is the slot’s simplicity that made it as famous as it is today — it comes with only a handful of symbols and a single wild symbol that will expand to cover the entire reel whenever it lands, awarding you with a re-spin at the same time.

These most popular automatic machines prove the variety of games from the manufacturer: there certainly will be an option to satisfy the most demanding customers.

All the above mentioned online slots embody all the best qualities which allowed the company to get famous. Let’s analyze what attracts people in particular.

The best news concerns progressive jackpots: according to statistics, they are won about every 8 weeks with an average amount of $4 million. Incidentally, the world record for the winning size in a slot — 17.86 million euros — also belongs to this company.

As you can see, the company is rightfully considered one of the best in the market since it creates and regulates popular online machines characterized with high quality, safety and profitability.

There are plenty of facts related to gambling that are so amazing you would never place your money on their truthfulness. Let’s check them out.
Read more
Some games in online casinos are more popular than others. Read our short guide to learn more about the games that casino players enjoy the most.
Read more
Evolution is a leading live dealer games supplier, reputed as one of the best online casino content providers. The company offers unique live games based on the state-of-the-art streaming technologies.
Read more